How Is Sleep Apnea Diagnosed?

Home > How Is Sleep Apnea Diagnosed? 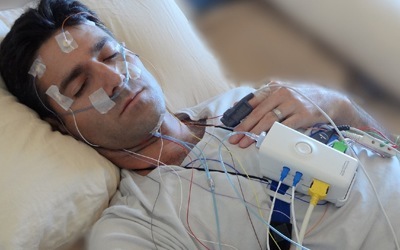 The primary method for diagnosing OSA at present is to have the patient undergo a sleep study, known as polysomnography.

What Does Polysomnography Do?

A Polysomnography patient sleeps in a laboratory overnight. Electrodes are attached to the scalp, on the outer edge of the eyelids and to the skin on the chin. Belts are placed around the chest and abdomen. A cannula is placed in the nose to measure airflow and a probe is placed on the finger to measure the blood oxygen level. While the patient sleeps, the polysomnography records body functions such as eye movement, muscle activity, heart rate, respiration, blood oxygen levels, airflow and the electrical activity of the brain. This information is then gathered and evaluated.

A sleep technician administers and attends the study. To prepare the patient for sleep study, numerous physiological monitors are attached to the patient to record nighttime breathing, brain activity, and physical activity. Electrical activity in the brain during the different stages of sleep is distinctly different from that while awake.

Electrodes are also taped to the skin near the outer edges of the eyes to record data for an electrocculogram (EOG). This tells the examiner where the patient is in rapid eye movement sleep (REM). A device is placed near the patient’s nose and mouth to measure airflow.

Electrodes are connected to an electromyogram (EMG) and taped or pasted on the patient’s chin to detect activity in the jaw muscles. The EMG detects the presence of REM sleep when the jaw muscles relax.

When Is OSA Diagnosed?

Obstructive sleep apnea is diagnosed if the patient has an apnea index greater than 5, that is, has more than five apneic episodes per hour, or a respiratory disturbance index (RDI), the combination of apneas and hypopneas, greater than 10 per hour. In the appropriate clinical setting, sleep apnea can be diagnosed by an RDI between 5 and 10. Experts disagree somewhat on precisely where the diagnostic threshold lies, so a reliable diagnosis needs to be made in the context of the individual. Furthermore, the criteria are even less precise in children, making an individual approach to diagnosis even more important.

Clinically speaking, an obstructive apnea is defined as a complete cessation of airflow for more than 10 seconds with persistent respiratory effort. An obstructive hypopnea is defined as a partial reduction in air flow of approximately 30% to 50% with persistent respiratory effort and a reduction in oxygen saturation by at least 3% to 4% and/or an arousal from sleep.