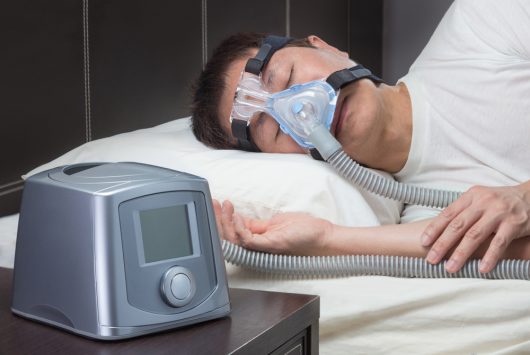 Someone with obstructive sleep apnea syndrome will have their breathing intermittently stop for upwards of ten seconds during sleeping periods. When breathing is stopped, this person will typically wake up to regain their ability to breathe. It can be hard for the person to know the number of times they wake, but their disturbed sleep can manifest itself in moodiness and fatigue throughout the day. Though anyone can have this condition, it is most commonly seen in overweight and middle-aged men that snore heavily.

Obstructive sleep apnea or OSAS is when one’s breath stops during sleep for small periods of time. Apnea or apnoea means the cessation of breathing. OSAS occurs due to an obstruction of the air in the airway, which happens at the top of the airway in one’s throat. This obstruction is because of relaxing throat muscles becoming droopy and flaccid.

For a person with OSAS, these muscles relax to the point where the airway is narrowed or completely obstructed. A narrow airway usually leads to snoring while a fully blocked airway leads to a stoppage of air (an apnea). The brain notices a low blood oxygen level and wakes the person up. The person then drifts back off to sleep unaware that they have even awoken.

Slow and shallow breathing, on the other hand, is hypopnea or hypopnoea (the partial blockage of air); it is possible for a person to have both occur (i.e. obstructive sleep apnea/hypopnea syndrome).

Many people will experience an apnea episode during sleep that usually ends with a snort. It is more serious if you have OSAS, which is diagnosed when a person has five or more apnea and/or hypopnea episodes for every hour of sleep. Mild OSAS is diagnosed for those with 5 to 14 episodes per hour. Moderate OSAS means having 15 to 30 episodes per hour, and severe OSAS is when a person has over 30 episodes an hour.

Who Will Get OSAS?

Some factors that cause or worsen obstructive sleep apnea syndrome include being overweight, having a thick neck, having a family history of sleep apnea, drinking alcohol at night, sleeping on one’s back instead of side, having enlarged tonsils, taking sedatives (i.e. sleeping pills or tranquilizers), smoking, or having a lower jaw that is receding (further back).

Depression, sleepiness, loud and frequent snoring, night sweats, morning headaches, irritability, inhibited concentration and cognitive functions, reduced libido, and unsatisfactory sleeps are possible symptoms. A person with OSAS also has a higher risk of having high blood pressure and therefore has a higher risk of stroke or heart attack. Diabetes and blood sugar regulation issues are also more likely for a person with OSAS.

Sometimes an Epworth Sleepiness Scale is useful for determining your quality of sleep. Other effective tests include a probe under the nose that detects airflow, a probe on the finger that detects the blood’s oxygen level, belts on the stomach that monitor breathing patterns a sensor that measures snore volume and bodily movements, or simply a video of a night’s sleep. You may need to be kept overnight at a hospital so they can perform thorough and comprehensive tests.

Maintaining a healthy body weight, not smoking, sleeping on one’s side or propped, avoiding sedatives, and not drinking alcohol before bed are all beneficial to a person with obstructive sleep apnea syndrome.

Continuous positive airway pressure or CPAP machines are the best treatment for moderate to severe OSAS. They can also be useful for mild OSAS in some cases. The person wears a mask while sleeping and a very quiet machine pumps air into the nose very lightly to help open the throat. This treatment often provides dramatic results; the person can expect to get more satisfying sleeps and to be less drowsy during the day. The mask can be awkward but most are pleasantly surprised by the quality of the sleep it gives them.